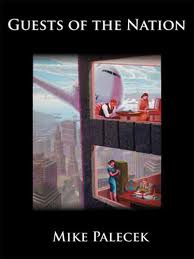 [Terror Nation] “Palecek is also a natural — or highly practiced writer. With his rolling rhythms, everything he writes, even Charlie Johnson’s brutal confinement, goes down easy. Like this cranky old man, our obstreperous democracy has been straitjacketed by forces beyond our
control.” — Russ Wellen, Intervention Magazine

[Looking For Bigfoot] “Aside from the intrigue of the story, the quotes and truth woven into the fiction make Looking for Bigfoot a very worthwhile read for those who are not afraid to discern the ugly reality beneath the comely veneer of America portrayed in Norman Rockwell’s art….”
— Jason Miller, Thomas Paine’s Corner

[Joe Coffee’s Revolution] “Palecek’s greatest talent is his ability to depict the ordinariness of life. After Palecek’s tender attention to the characters’ small lives, readers will feel the same itch for revolution that the characters give into.” — Meta Hogan, Voice of Olympia

“It has been many years since I picked up a book and didn’t put it down till I finished it. Mike Palecek’s “The American Dream” smacks you right between the eyes with every turn of the page. This book tells the God-awful truth that none of us wants to accept.” — Guy James

“No more than a few degrees from what currently passes for reality, ‘The American Dream’ is a societal vision that hits too close to home(land) to be called a futuristic satire. Channeling both Orwell and Bill Hicks, Mike Palecek has created more than a powerful and engaging novel; he has let loose a global wake-up call.” — Mickey Z