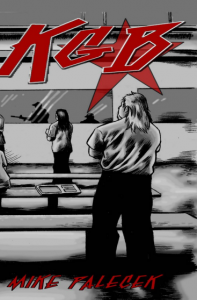 The main story centers around Walter Gerald, a construction worker who is arrested for threatening the life of former president George H. W. Bush. He is sent to Woodbury County Jail where he is befriended by the rough inmates of “D Block” led by repeat offender Mark Pontiac.
As alternate chapters go into detail of the atrocities carried out under Senior Bush’s orders, including the massacre of innocent women and children in Panama and the support of terrorists in El Salvador, the inmates eventually decide to help Walter assassinate Bush when he comes to town on a publicity stop.
There are also some interesting connected side stories like that of Elana Usak, a pirate radio DJ on the run from the FCC, and a group of conspiracy researchers who catch wind of the assassination plot and decide to take action.
See more or order a copy at CWG Press or Amazon

“The prisoners in the Sioux City, Iowa county jail read, in the one    newspaper passed around to all the blocks, that General Pinochet    has been arrested.  These inmates, the damned of America, determine    that George Bush Sr.  is also a war criminal, and plan how to bring    some sort of justice to these United States.”

“KGB is imaginitive and well-written.”

“Isn’t it interesting that the killing of the poor and anonymous is not illegal?”