“I would meet with the most outlandish assertions from seemingly educated and intelligent persons. It was obvious they were parroting some piece of nonsense they had heard on the radio or read in the newspapers.

“Sometimes one was tempted to say as much, but on such occasions one was met with such a stare of incredulity, such a shock of silence, as if one had blasphemed the Almighty, that one realized how useless it was even to try to make contact with a mind which had become warped and for whom the facts of life had become what Hitler and Goebbels, with their cynical disregard for truth, said they were.”

— WILLIAM SHIRER, The Rise & Fall of The Third Reich 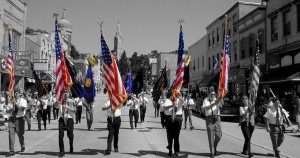 There are those we depend on, who come running when we need help.

But there are firemen in every town, every village. Everyone’s uncle has nine nephews who are firemen.

They are Thomas Jefferson and Paul Revere in yellow coat, helmet and big boots — teaching us while ringing the bell.

They are always on-call, rarely take days off, and work years, decades without pay.

They are more important than a dance hall full of firemen.

Fetzer & Barrett are telling us the truth about America.

They are The Dynamic Duo.

The Americans dream of rocket ships, fireworks, freedom and alleluia, while they sleep on through the alarm, the house afire.

So, put out the searchlight.

The British are here. …

Both grow out of necessity.

Somebody had to do it.
No doubt it would fall to somebody.
No doubt somebody will do something.

Yes, probably, but up close it comes down to someone, some living, breathing, thinking, feeling person, beginning to understand, and then … beginning to do something.

Beginning to put self behind, career behind, safety behind.

Kevin Barrett and Jim Fetzer donned the name “The Dynamic Duo” when they hosted a radio show together.

Like the people in The White Rose Resistance movement in Nazi Germany who fought with words, by distributing leaflets, by expressing their opinion, Fetzer and Barrett do the same as they fight along with others against the American Empire whose existence can no longer be denied.

There is something that burns in the heart of people like these — Jim Fetzer, Kevin Barrett, Sophie Scholl, Hans Scholl, Alex Schmorell, Willie Graf, Christoph Probst, Kurt Huber — a fire that cannot ever really be extinguished.

And we may take great comfort in knowing that the same thing that it is within them is inside of each of us, too. 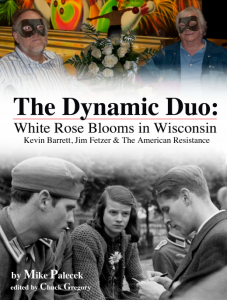 “I’m going to tell the country you’re a nut and you hate your country.”

— Jim Fetzer and Kevin Barrett explain how we know that the answer is,”Yes!,” “Yes!” and “Yes!”

What could cause political figures and major newspapers to raise these objections?

George Orwell answered that question: “In a time of universal deceit, telling the truth is a revolutionary act”.

From that day we got Oklahoma City, we got 9/11 and Afghanistan and Iraq.

From that day we get this day, today — our world, our lives — whatever is yet to come in Syria, Iran, Ukraine, perhaps even WWIII.

We can choose to watch it unfold on TV, or we can do something.

For years and years, Fetzer and Barrett have done everything they can.

This biography of Fetzer & Barrett also:

* Connects the dots between resistance efforts against the American Empire and the White Rose resistance against Hitler.

* Tells the truth about 9/11, Sandy Hook, the Boston bombings — false-flag attacks designed to soften the resistance to American dominance at home and abroad.

* Shows the way to understanding the world in which we live today — and points the way for a stronger and more democratic and just society.

Fetzer and Barrett — The Dynamic Duo — the face, the heart, the soul of the American Resistance to war, oppression, secrecy.

They are the real hope of America for real change.

They are the face of Jefferson, Paine, Franklin.

They look at our nation and speak truth.