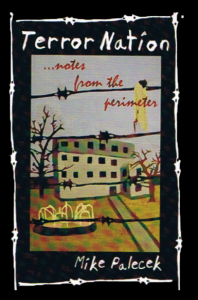 Charlie Johnson is the main character in Terror Nation. Charlie is a former sports reporter for a small Iowa daily.

After he retires he begins to write anti-Bush letters to the editor.

He is taken to the local mental hospital for a “check-up.”

Here is one of Charlie’s letters to the Saint Smith paper.

I have a neighbor across the street.

We have watched each other out our front windows for forty years.

Their son played ball in our yard.

Last week that son’s boy came home in a body bag in a box in the belly of a big Boeing, back from Baghdad.

That is nothing to “b” joking about.

I have talked to my neighbors since then, on the sidewalk in front of the house, and again on the side steps of St. Mark’s after Mass.

They say Timothy died because he loved freedom.

They say he had his head blown off his shoulders, his legs cut off at the knees, lost his hands, to make us free.

Of course, that’s not true. But what else do a heart-broken grandmother and grandfather have to hold on to?

Someone needs to speak for Timothy, perhaps speak to him, to tell him the truth, because we lied to him his whole life.

Timothy died because of us.

We told him it was good to go.

Fr. Cyril, either by his legendary silence, or the flag next to the altar, said it was good to go kill children and call that fighting for freedom.

She never met Timothy, but Cindy Sampson, our new editor from Iowa State, told him the same by the stories she ran, and the headlines and the photos and editorials, so patriotic, so deceptive, so self-serving.

We whispered, go kill, go shoot, go murder and steal, and we’ll all call it “fighting for freedom.”

And when we hear in the big city newspapers and TV after thousands and thousands have died that there was no reason to die — we’ll dig our heels in the front lawn grass and still call it fighting for freedom.

And when our grandchildren hit the ball into the graveyard and come back and ask us about the headstone with the flag on it and the same last name as theirs — who was that?

We’ll bite our tongues and clench our fists and look anywhere but into their trusting eyes, and we’ll tell them Timothy died fighting for our freedom.

2 thoughts on “Fighting For Freedom”