Someone woke up very early in the morning and went right to the guns to see they were still there and all right and safe and clean and happy.

Someone called someone and talked over a final note that had kept them from sleeping past three that morning.

Someone else awakened with a smile to think of the cumulative power of all the months of preparations, finally coming to fruition.

Two persons worried that all the details were in place and what could possibly go wrong.

One person woke up at the alarm clock, wondering for a moment where he was, and rolled to the bed table to check departure times once again.

Someone else asked someone at the end of breakfast: What about the children.

I’m not sure I know what you are talking about was the only response before they crumpled white napkins and tossed them along with a couple dollar bills onto plates and went off to meet the plane.

… Catholic school construction heated up around the United States during the whole first half of the 20th century.

People were glad they had survived the Second World War and everyone was excited to expand, to move into a new place, buy a toaster and get on with the exciting new prospect of living.

And in the 1960s every berg and ton and ville in the Midwest boasted a Catholic block of school, rectory and convent.

The sisters and priests and bishops and parents energized each other to offer a firm alternative to the suggested boogeyman, anti-religion communism.

They constructed a cozy campfire of Catholicism in the middle of town and invited all to join, to come sit around the fire and warm their hands and their feet around the pulsating heart of Jesus.

Then a Catholic President was elected and Pope John XXIII called the Second Vatican Council.

The United States had recently introduced the universe to nuclear weapons and Tide and the new Catholic President talked about going to the moon.

Civil rights and Vietnam turned the cozy campfire into a forest fire.

In the heat of it all the stout soul in the basement, the school boiler, pumping proudly, like Boxer, on a frozen Midwest morning.

If the mostly unseen boiler did not work, Sister would send a classroom representative flying downstairs, leaping whole sets of steps, to tell Mr. Somebody that there was NO HEAT in Sister’s room.

With NO HEAT everything rumbled and dragged to a halt.

The learning did not go on without the pulsing of the heart of the boiler in the school basement, next to the school stage and the kitchen where the Catholic Daughters made the triangle funeral sandwiches.

The school janitor charged downstairs at five a.m. by the light of the full moon to stoke the fire, proud of the task he had been given by the priests and sisters after he moved to town from the farm.

The moon, the man, and the boiler, the basics, the fundamentals of Catholic education, worked together to send the heat to what would soon be the sacred symphony upstairs, directed by the celestial, exotic nuns who all came from somewhere else to be with these town kids in their snowsuits and fourteen buckle overshoes.

A tune repeated in hundreds of cities and towns each morning, thousands of lighted flames, culminating, generating upward in one big homecoming bonfire of 1960s glory in The United States of America.

And that was how life began, out of that primordial ooze of snow slush flavored with radiation, colored by Rambler exhaust and cocker spaniel piss. Remembering the past, yet rushing with arms wide toward the future, caught between The Flintstones and The Jetsons.

Captain Marvel, My Favorite Martian, The Twilight Zone, Bewitched, aliens, Roswell — a world wanting to know how far it could go — on the edge of science fiction, of fantastic ideas about time and space and society, race, poverty, war and religion.

These innocents in the upstairs classrooms assumed the best from America.

They looked at JFK on TV, smart, handsome, smiling, funny, and just knew they were in the best place and time there had ever been — or maybe they just assumed it was always this way and always would be, maybe that was it. Maybe they did not think so much as feel.

And when they grew up not too long from now they were going to the moon and outer space and to dances and football games and they were in love — it was just the best place ever and it was just going to get better. They couldn’t wait to grow up — they so much wanted to be alive, to live.

All this and the Beatles, too.

And every morning there were the old people at Mass, the persons these young people were resigned to someday becoming — half-kneeling in the back in the shadows, watching the children, someone they used to be, watching, banging their elbows and rosary beads on the wooden pew backs, still confident of their own specialness, of being Catholic, of going out in a blaze of glory.

… Now just let me say that Johnny was a fat boy.
A fat young boy in the third grade.

Who thought he could fly. Because he saw things that others did not.

Not because he was so special, just that he cared enough to look.

It’s true the world is not as we see it. We see it, but it’s different. Way different. Like that.
If you want to know the truth.

And the truth is that Johnny could in fact fly, but he looked like he could not, and so you might assume that he did not.

He looked less like Superman and more like a, well, a fat robin, big- boned, wearing buckle overshoes and a snowsuit.

But his snowsuit was blue, not red like a robin, so maybe he was a puppet, a flying blue Sesame Street puppet, with special powers.

And a corduroy cap with a button on top and a buckle strap under the chin.

A fat young third grade boy headed down the steps of his home wearing a snowsuit and buckle overshoes in late November, trying to run as best as he could, carrying his sack lunch in one hand and trying with the other to buckle his hat strap under his chin as his mother had just shouted from the doorway.

Who took off down the sidewalk, shuffling under all that weight — which actually wasn’t all that much — but he thought it was, and that’s all that every really mattered.
He was inspired and he wanted to do something about it, and to do other great things, too.

Well, he took off from his front porch with his arms up and out, one hand holding that lunch sack, like Superman headed to work.

Not that Johnny actually thought he could fly, but he thought some people maybe could and you never really knew until you put your arms out.

He had tried it before, so he kinda already knew that much about himself.

But he was inspired and he wanted to try again.

So he took off, again, his eyes wide and his arms out and up, though already they were getting a little tired, with the blood draining down his arms to make his face red.
He would try to fly, settle for a little running until he got really tired, and then he would walk.

He would walk as far as he could, but would that be far enough? He did not know because he had never done this before.

He smiled as he chugged down the broken sidewalk, across the street and out of sight of his white-painted home as his mother checked the sky, folded her arms across her chest and ducked her head against the sudden chill to head back inside.

He pitched his chin and gritted his teeth and looked straight ahead, down that sidewalk that stretched straight to forever almost. He could just see the railroad tracks at a rise in the flat landscape and he saw the school and the cross atop the church that Johnny told himself, not anyone else, looked like a radio tower for space aliens.

And he smiled again, this time only internally, just to himself.

Not to brag, in case anyone would see him smile too much or too often and send him to the retard workshop not real school, but he knew he would make it.

And he would start by walking to school this morning. No problem.

He was an American, and he was special. He just was. What could he say?

But still, between Johnny Moon and the school and the church were a few blocks of Russians and Communists and UFO space aliens and chances that he’d go to hell, and fat, blocks and blocks of being out in the wide open and being fat, and there were kids and people with money and people who were not nice, he had been told they were there, who told all manners of lies and engaged in deceit and well, lies … and well, deception.

And they would just as soon kill you as look at you. That was from either … Jack LaLane or “The Tonight Show” or “I Love Lucy,” he was not for totally certain.

But Johnny Moon did not let that bother him, because he was special.

He was an American.
And a Catholic, too.

“I’ve read JFK assassination fiction by Don Delillo and Norman Mailer, and can tell you that this new novel not only is Mike’s best book yet, it’s much better than Delillo’s and Mailer’s efforts to do justice to the most important event in US history. Mike’s book gets everything right. Its rich mix of realism and fantasy as viewed by a precocious third grader, alternately hilarious and horrific, is unlike anything else you’ve ever read.” 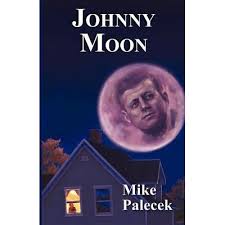