I am an American. I have big dreams.

And like the rest of us, I have been damaged beyond repair by television. Look at me. I am a mess.

I grew up on TV and eating … ice cream … ice cream bars … ice cream sandwiches … sitting on the floor of our home on Sixth Street in Norfolk, Nebraska … watching TV. I weighed four hundred pounds by the time I was in fourth grade. No problem. Get bigger pants.

I knew my ice cream.

And I knew all about Barney, Goober, Andy, Gunsmoke, I Dream Of Jeannie, My Favorite Martian.

Who can forget Bonanza — the episode Hoss And The Leprechauns. A classic. Like Grapes of Wrath.

We always watched Johnny Carson, of course. He was from Norfolk, graduated from Norfolk High School. Hometown boy who done good. Very good.

I’d lay on the floor facing the TV, a bowl of chocolate swirl in front of me, rolling over on my back during the commercials to shovel in a few scoops, then roll back for more instruction from Don Rickles, Frank Sinatra, Burt Reynolds, Bob Newhart, Bob Hope, Brian Keith.

In the forward for my novel The American Dream I talk about my parents, Milosh and Isabel. They were Czech and Irish. They moved to Norfolk from Winner, South Dakota when dad got his big break to be an engineer for the Chicago & Northwestern Railroad.

They grabbed each other in the South Dakota wind and held on.

They were true believers in the American dream, I suppose, though they would not have put it that way. 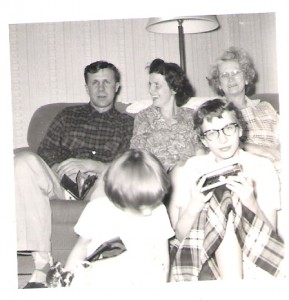 More likely they just believed in working and going to church and mowing the lawn and taking care of your car and watching the ball game or Bonanza if it was on.

Dad spent part of his career on the Long Pine run, staying overnight at the motel near the tracks and fishing for trout.

He brought fish home and maybe a foul ball from the amateur games in Winner when he got a chance to go there and see his brother Jimmy, home from the Pacific war, now with a wife and his own family.

Another brother, Albert, served with Patton and later went to South Omaha to work in a box factory.

Frank went to California. Molly just went away. Dad didn’t go to the war because his job with the railroad was considered vital to the war effort.

They said Dad was good enough at shortstop to go pro, but he didn’t. Maybe he had to work. Hauled cases at the pop factory before the C&NW.

They did the best they could. It’s sad, a sad state of affairs for a whole nation.

Everyone does the best he can and we end up bombing Hiroshima. Dad cuts the lawn each Saturday morning on his one chance to rest and there go a thousand people in Chile, mowed down by our own CIA.

Mom calls us in to supper and poof! Laos is toast.

Us kids sneak outside for another round of playing after supper. We play hide and seek, catch lightning bugs, tell ghost stories and leave the screen door open just a peep.

A couple hundred intelligent poor people in El Salvador are hustled out of their beds and shot.

In Norfolk the media was The Norfolk Daily News, WJAG Radio and the Omaha World-Herald.

There is no way for someone just growing up, or someone who has not been much of anywhere else to know that those outlets distort the news. They tell the story in the way they want it to be told.

We suffered and bled along with the perils of Otis The Drunk, but did not have a clue about the people being murdered by our own government in Chile. And nobody told us. We weren’t supposed to know.

There really is no way of knowing — not some fat kid who only has eyes for Strawberry Swirl — that what is on TV is not great and true and the only real reality worth understanding.

It wasn’t until I left Norfolk, to go to the seminary in Minnesota, then Washington, D.C., then New York, later prison, that I began to understand what a warped vision and body my upbringing had saddled me with.

Later on, I even questioned Johnny Carson himself.

I studied the JFK assassination and learned that attorney Jim Garrison had been a guest on The Tonight Show, talking about his investigation. I listened to the recording on the internet of Carson grilling Garrison.

I found Carson’s address and wrote to him, asking him, Norfolkan-to-Norfolkan — what is going on here?

I am originally from Norfolk, Nebr., graduated from NHS in 1973. Recently I had a chance to listen to the tape of your interview with attorney Jim Garrison. I don’t recall watching the live interview, but very well could have as watching your show before bed was our regular routine, as it was for many others.

As a fellow Norfolkan, I am curious as to why you treated Garrison as you did. I probably will not get the chance to contact you twice, so I will be frank right away.

You sounded as if you were acting as a spokesman for someone else. Really. Were you protecting the real killers of Kennedy?

Of course, you were. What else can I say, but that it is obvious now with almost forty years of perspective. The Warren Commission was a joke and Garrison was on to something.

Something frightening to be sure. But why did you have so much allegiance to the plotters and none to your dead president? Because he could not pay you from the grave? Is it as simple as that?

Thanks in part to you we have been forced to live in Disneyland since 1963, where everything is unreal, everything entertainment and illusion.

Please tell me, as I will never know myself: Is wealth and power worth the sublimation of the truth?

Thank you for your time.

I’m sending you a copy of a letter I recently received to make you aware that some ignorant asshole is sending out letters over your signature.

You should look into this.