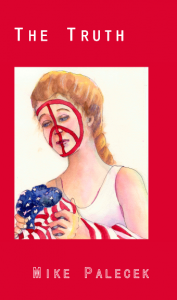 There’s a photo on the Internet that makes me laugh.

The horrified little fellow now has no arms or legs, or brothers, sisters or parents, and I laugh out loud.

I laugh at the Marines, being all they could possibly be in God’s creation, at their tough-man commercials.

The Army of One. What a hoot.

The rough-guy coaches and players who let this boy die—what comedy watching them feel strong while letting the real battles be fought by little guys with sticks and bicycles.

The boy has a bandaged head. He looks so scared his hair might turn white, as in a Hitchcock film, and it sort of makes me chuckle.

I laugh at the ministers here in town and here on this TV saying bless our troops as they defend our freedom.

I laugh at the well-schooled and coifed newspaper columnists with their earnest close-cropped photos in four hundred papers read by forty million people in forty million cities.

The boy is flat on his back on dirty cement, with his stubs hastily wrapped in Ace bandages, surrounded by the world trying to get a look, by photographers and people on their way to work and out to dinner.

Because this boy now has no arms. No legs.

Nothing we do today will mean a thing because we have ripped the arms and legs from this boy as if he was a fly and we are us.

This boy who could be my boy, lying there at the feet of the world and the world looking the other way.

Give us what we deserve.

If you are a just God, rain down fire and hell upon our heads.

Lighting bolts upon our backyard decks and rivers of excrement down our smooth, well-scrubbed streets.

When I awoke this morning I thought it essential to the world order and being right, and a good person, that I shave, help out with the dishes, be on time, and drive on the right side of the road.

Do a good job. Be pleasant. Smile.

The world thinks it still matters, and that’s kind of funny in a way.

There, the flag flying over the Catholic elementary school and the yellow ribbons tied to the light poles on both sides of Main Street.

Stray cats wearing yellow ribbons around their necks, roaming the night, looking both ways before crossing the street, as if it mattered.

You are never so wrong as when you damage a young boy.

We sit down here like the Who’s in Whoville celebrating the coming of War Season while this boy lies on the cold floor.

Against the backdrop of history, we have the story of a small-town mailman whose son is one of the U.S. casualties during the Occupation of Iraq.

We see his almost inevitable realization of the cruel, deceptive and cynical context within which many sons and daughters continue to sacrifice their lives.

Mike Palecek’s latest book The Truth is a vital book on a vital subject.

Democracy (of any definition) is threatened in the United States more than any time in her history.

It is threatened not only by the erosive events enacted by the Bush Administration (and the events are many, both in domestic and foreign affairs), but also by the inertia in response, or non-response, by a truly frightening number of the American public.

The book is organized with even-numbered pages carrying quotes of significance to the point of the lockdown of America (from Goebbels, from Goering, from Ari Fleischer – but also the wonderful and inspiring words of such human beings as St. Augustine, as Thomas Jefferson, as well as writers and thinkers and journalists ranging from Helen Thomas to William Shakespeare..) and the odd-numbered pages relate the story of Pete Penny.

Either the quotes alone or the story would be fully satisfying, but together they serve in creating an acute tension of the individual life in historical context.

This same tension is further played out in the very, very funny sections that run throughout an otherwise almost Kafkaesque unraveling of the life of one man.

The extremely comic attend the tragic of both the story and history’s narrative, just as the ludicrousness of an absurd President underline the daily horror.

The horror of the Administration’s avarice and lies in a bloodshed which shows no signs of abating; the mockery and indifference to much that the American people have valued; the ravaging of any American dream.

It is without hesitation that I urge everyone to read this book.

For those who are lost in the chaotic events of our times, it is illuminating and for those who are familiar with the aspects that Mike describes, his lucidity and fine perceptions further organize our thinking.

(“I found out the truth, man, but it’s better to stay stupid, go to ball games, smoke cigarettes and fish from the shore. Figuring it out is not the hard part. It’s what are you gonna do, now, man? That’s when it gets tough. What you gonna do now?”)

One thought on “On Memorial Day, Remember Our Victims: THE TRUTH”