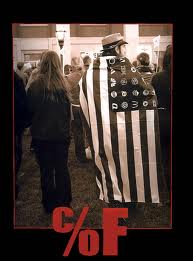 One of the guests for The New American Dream Radio Show this Thursday is Michael Annis, legendary book publisher (Howling Dog Press, Denver), who produced the legendary anti-war book “Cost of Freedom.”

Whitney Trettien was the editor of the book.

I was the one with the original big idea.

from Cost Of Freedom

In a speech at the Naval Academy in November 2005 President George W. Bush said “we fight the enemy in Iraq.”

We fight the enemy within the United States.

We fight the enemy within the United States government.

The enemy is George W. Bush.

Dare we say it?

Yes. We Dare. We say it. We shout it. With a fist for punctuation.

Our enemy is not Iraq or the Iraqi people, nor does our enemy lurk in Afghanistan. More likely in the dark cave of an elite D.C. pub.

Our soldiers in Iraq and elsewhere are not protecting our freedom.

That’s someone’s spin on today’s news, someone else’s sermon. They die in vain. They are unjustified in their killing. Their young blood can never be washed from the hands of George W. Bush, Dick Cheney, Karl Rove, Donald Rumsfeld, and parents, teachers, ministers, editors who could have told them the truth.

And sadly, the blood of the Iraqi people — mothers, fathers, little children — also stains the hands of those who should not have been there.

Thou Shall Not Kill.

We are behind enemy lines. We are the underground, the resistance, the freedom fighters — here in Bismark, Boise, Bemidji, Brooklyn, Berthoud, Bellingham.

And we celebrate that. We give thanks for those who have had the courage to light a candle in the fiercest of winds. We rejoice for Lori Price, Marc Ash, Cynthia McKinney, Cindy Sheehan, Helen Woodson, Jim Fetzer, Fr. Carl Kabat, Lisa Casey, Bartcop, David Ray Griffin. There are thousands of names that should follow here, millions.

Remember the photo of the young woman at a protest in Denmark that appeared on Common Dreams before the invasion? She had a red peace sign painted on her face and her look was dour. That image was everywhere and it spoke to us, spoke for us. We knew it was going to happen and we were sad.
And it did happen.

But there were more signs made on kitchen tables and church floors. And we kept marching. We learned it was a controlled demolition, serving the lust for riches of a demented few. We studied and we dug for the truth, and we told each other, on the internet, on the street corner, on the subway.

We came to know the Bush cabal for what it is, and we screamed for justice.

These were ugly times. The ghouls in the dark forest were real, and they’re still out there.

For me, after 9/11, I knew things were bad when I heard “God Bless America” on my car radio while headed to Dordt College to go jogging on the treadmill. Kate Smith scared the crap out of me.

I taped a little sign on the fire hydrant by our house.

I had a paper route then, so I would put out the sign when I left, very early. The sheet of paper read: “The United States Air Force, Our Terrorists.”

Someone tore it down every day.

Then somebody put a sign on our front door that said I should go to Canada.

I wrote a letter to the editor and a local policeman came knocking to say someone had said I had ties to Osama bin Laden. Just checking it out.

Well, then things went on. Lots happened. We mowed our lawn, many times, many people died, we grilled outside, cities were bombed, we changed our oil — had someone else change it.

I heard one day on that car radio of mine — though now the brown Ford Contour was a white Honda Accord — anyway, the radio said that I, we, all of us, owed our freedom to some soldiers who had died in Iraq.

So I thought about the cost of freedom.

And I decided quickly that it had nothing to do with those local men dying in Iraq.

I stormed into the house, head down, short, quick little steps, charged upstairs, puffing, and put together a generic email, and in a few hours sent that damn thing all over the country, asking folks to send me their stories of how they or others they knew had fought Bush and paid the real price for freedom in these past, very dark years.

People responded, just as they have ever since we watched those towers come down. They sent their stories and photos.

These are the heroes.

Just as forever in American history, it is to these few that we owe our freedoms and lives.

Those who rise up from the kitchen table, not deluded, aware, pissed-off, courageous — who walk out into the street and demand justice from those who always seek to take it away.

These real American Heroes rip the scepter from the hand of the despot, force open the prison door, breach the walls of the bullet factory, gather the riches and place them in the hands of their rightful owners: the people, the poor, the children.

They hold up the mirror to the clergyman who displays an American flag and a dead Iraqi child on his altar.

I looked for help and found two great people: Whitney Trettien in Maryland and Michael Annis in Colorado.

They are also American heroes, as are the contributors to our book. Whitney is young, bright, energetic, talented, the hope of the world. Michael is a street-fighter publisher, a craftsman, something rare in American media — a poet willing to base a life’s work on truth rather than riches.

And here we all are, as Bill Hicks might say, shooting spit wads at the mad elephant — placing snares made of twigs, poster board and magic marker in its way, hoping to bring it down before it destroys the village.

3 thoughts on “The Troops Are Idiots, Terrorists; Protesters Protect Our Freedom”